Innovation and collaboration: the fight against dengue in La Paz

It is said that Mexico is a country with many “Mexicos” in its interior. Its ethnic, geographic and faunal diversity place it in the small group of countries catalogued as megadiverse, with 70% of the world's species diversity and more than 5,000 endemic plants and animals.

The Aedes aegypti mosquito, carrier of the dengue, Zika and chikungunya viruses, is not endemic to the country; however, it is a master of adaptation.

The City of La Paz, in Baja California Sur, is an example of this mosquito's ability to reproduce in the most diverse conditions. Contrary to what is considered a favourable environment for mosquitoes – humid and hot – La Paz maintains an ultra-dry and extreme environment throughout the year.

No one expected that, starting in the 1970s and in less than 10 years, dengue would spread throughout most of Mexico. By the 1990s the population recognized the disease as "the breaker" or "the bone-breaker” and assumed it to be a disease that could be treated by self-medication. Based on data from the Ministry of Health in Mexico, the average number of dengue cases per year in the country is 79,000, although researchers believe it could be between 10 to 36 times higher.

The last outbreak in Baja California Sur was in 2014. According to the State Health Secretariat, a new outbreak of dengue was expected in 2021. Fortunately, this outbreak did not materialize which is encouraging news for the World Mosquito Program and the government.

"I have known about the World Mosquito Program since 2017," comments Lorenza Amparo Garcia, Deputy Director of Community Health Services. "The project, that had already been implemented in other countries, came to Baja California to collaborate with the State Health entity".

“Our collaboration with WMP and the government of Baja California was a very successful project, because we already had the organizational structure to implement what the WMP needed and they brought to us a new technology to combat dengue in a sustainable way. Everybody won!"
Lorenza Amparo García
Community Health Services 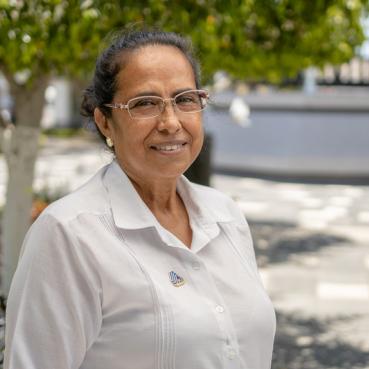 WMP activities started in La Paz in 2018. By the end of the mosquito releases -during the first half of 2021- the project covered 50 km2 of the city and protected more than 250,000 residents against diseases transmitted by the Aedes aegypti mosquito. Thanks to the sustainability of the method, it is expected that Wolbachia will remain present among the mosquito population without the need for further releases in the years to come.

"The WMP work was carried out in parallel with our traditional methods to combat dengue and this was very important for the government: working with the Wolbachia method did not mean changing our entire program of activities, but was complementary and very friendly in terms of its application," reflects Dr Garcia.

More than 5,000 volunteers supported the release of mosquitoes in La Paz, coordinated by 84 members of the project led by the World Mosquito Program and the local and state Health Sector.

The community participated on several fronts, from hosting mosquito monitoring traps in their homes to sharing the work of WMP among their acquaintances and being an active part of community meetings, school activities, sporting events, among others.

One of the volunteers was Mr. Arnulfo Cervantes, who knew about the project and got almost immediately involved by hosting mosquito traps. "I told them to put all the traps they would like in my house, I wanted to participate."

"It's about time we get rid of dengue.  Now it has decreased and I would like the WMP project to be expanded throughout Baja California. There are plagues that we should not have, dengue is one of them and thanks to this program we can fight it."
Arnulfo Cervantes
Volunteer

WMP has now successfully completed the phase of releasing Wolbachia mosquito in the city. Through the Ministry of Health of the government of Baja California Sur, the monitoring of the Wolbachia mosquito population and dengue cases will continue for the next 5 years in order to determine the effectiveness of Wolbachia. Once confirmed, the results will be communicated to the population.

The hope for a dengue-free country inspires WMP to work towards protecting even more communities across Mexico. "The most we hope for is that the mosquitoes, even with dengue inside them, will not transmit the disease thanks to the fact that they also carry Wolbachia. That would mean that even if people are bitten they will not become infected and we could win the battle of adaptation," concludes Dr Garcia.

After two years of intense work in the field and with the collaboration of governmental entities and the community in La Paz, we have completed our releases in the city.