A peace treaty with mosquitoes in La Paz

Leticia has lived in La Paz, the capital of Baja California Sur, in Mexico, for more than 20 years.“I love living here, it's always hot and you get all sweaty, but I don't mind... it's what makes me feel at home.”  The dry environment and high temperatures of the area might seem like an obstacle to the proliferation of mosquitoes, however, it is precisely the scarcity of water that requires the residents to store, as best they can, large volumes of water in and around their homes, thus creating an ideal environment for mosquito breeding.

“My name is Leticia Enciso Zamora, but no one calls me by my full name; here, everyone knows me as Mama Lety. When I walk down the street and someone greets me like that, I know it's because they have worked with me or I have visited their house. All my acquaintances come because of the mosquitoes, and I can assure you that, at one time, thanks to those little animals, my family and I had enough money to eat.”

Mama Lety tells us how one day, while pregnant, she was suddenly left in charge of her three children after her husband abandoned them. “I said to myself: let's see, you're not the first or the last woman whose husband leaves her, so let's find a way to get ahead. And it happens to be that the way was through the mosquitoes”.

My first job was to go from house to house showing people how to keep their places clean, without garbage in their yards or zones where mosquitoes could lay their eggs... everyone received me well, maybe because they saw me pregnant or because I spoke to them like everyone else here, simple and direct. That was the start of my career at the Health Sector of the municipal government and also the beginning of my story with the mosquitoes."
Mamá Lety
Laboratory Assistant WMP Mexico 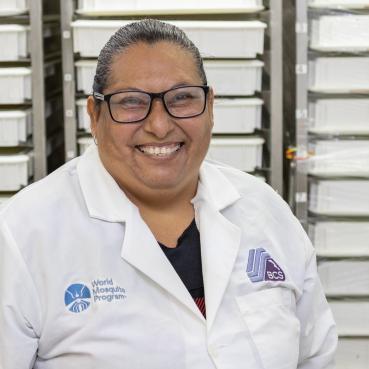 According to data from the Ministry of Health in Mexico, the average number of dengue cases per year in the country is 79,000, although researchers believe it could be between 10 to 36 times higher.  The mosquito that transmits dengue, Aedes aegypti, is also a vector for diseases such as Zika, chikungunya and yellow fever. When biting a sick person, the mosquito picks up the virus found in the contaminated blood and transmits it to the next person. Thus, the mosquito does not get sick, only serving to pass the virus from one person to another.

The World Health Organization classifies dengue fever as one of the most critical mosquito-borne diseases and raises awareness about its rapid increase over the past 50 years. The World Mosquito Program discovered that, when the Aedes aegypti mosquito carries Wolbachia inside, the bacteria compete with any viruses the mosquito carries, making it difficult for the viruses to reproduce and thus reducing virus transmission.

“I had already been walking the streets of the city for years with my daughters, as I called the young women that used to work in my team... they told me that I was like their mother because I always took care of their safety. I saw them as my daughters, maybe because I thought my own children were alone at home and I wish someone would take care of them too."

Thanks to her effort and dedication, her bosses recommended her to work for the World Mosquito Program, who were looking for people with knowledge of mosquitoes in the area. "I recall saying `Oh, I know about that!´" Mama Lety laughs, with a hint of shyness.

"Now that I remember I feel a little embarrassed... because I knew about visiting the neighbours and explaining prevention methods, but working in a laboratory, locked up all day and classifying larvae, no, I didn't know anything about that... but I learned it!"

Mama Lety's activities within the World Mosquito Program keep her maternal feelings alive. "I think of myself as the mother of thousands of mosquitoes. I am in charge of classifying the larvae, counting 1500 per tray and then we put them in water and food. We take care of them for five days, until they emerge as pupae; one day later, an adult mosquito arises with the Wolbachia bacteria already inside of it.”

To date, more than 5000 volunteers have supported the release of mosquitoes in La Paz, coordinated by 84 members of the project led by the World Mosquito Program and the local and state Health Sector.

"I am 51 years old and I have seen many people sick with dengue. My three children got it, one of them almost died. The hospitals were overcrowded with dengue patients so I had to take care of him at home, with medicine and natural remedies. If we can somehow diminish or end this disease it would be like signing a treaty of peace with the mosquitoes, not only for La Paz but for other states in Mexico where dengue kills many people."

"When I first learned about this method, it seemed to me it was taken from a movie... a science fiction movie."

In this short video, WMP team members and community members discuss the impact of dengue in La Paz and what it means to have the project up and running in their home town.