Mr D.D.C. Nawarathna has lived in Sri Lanka for most of his life. For as long as he can remember, dengue has been a problem.

Mr Nawarathna’s earliest encounter was a distant relative getting sick. But being a child, he wasn’t too worried. This is a sentiment he feels was shared by those around him.

“Initially we didn’t care too much about dengue. Later on, with experience, we learned to fear it very much,” he says.

Dengue has been endemic in Sri Lanka for decades. But in recent years it’s become an increasing public health concern, along with other mosquito-borne diseases such as Zika and chikungunya.

The World Health Organization reported that in 2017, dengue cases were more than triple the average for the same period between 2010 and 2016.

It was around this time that Mr Nawarathna’s wife was infected. He quickly learned just how serious dengue could be, not only for the person infected but their families.

“By that time, I had a bit of knowledge about dengue fever, and I was confused and a bit scared and had doubts about the recovery too. And we did everything we could … she stayed about 10 days at the hospital,” he says.

The social and financial costs of dengue

The stress caused by his wife’s illness went beyond his obvious concern for her welfare. Mr Nawarathna said he struggled to juggle cooking, maintaining a household, supporting his children and grandchildren, preparing food for his wife and visiting her in hospital.

It was an expensive time for the family, and many aspects of their lives were put on hold. And it wouldn’t be the last time Mr Nawarathna’s family were impacted by the virus.

Two of his grandchildren later contracted dengue and required hospitalisation. Once again, dengue forced the family to change how they lived.

“We were very worried. They live on the upper floor. My daughter stayed with the kids in the hospital. My daughter’s husband couldn’t get time off work so I had to do a lot of things … it wasn’t easy,” he says.

Dengue can have dire health consequences for those infected. But it also takes children out of school, stops adults from going to work and making money, and puts additional strain on caregivers who are often supporting other children and extended families.

Protecting communities for years to come

Mr Nawarathna’s local municipal council were using traditional methods of dengue control such as insecticides and smoke, but he says these were not effective, long-term solutions.

“I personally felt it wasn’t effective enough. The municipal council smoked the area once a month but there was no reduction in mosquitoes. Mosquitoes will decrease if we use coils or insect repellent only temporarily.”

That’s why when he found out about the ground-breaking Wolbachia technology the World Mosquito Program was implementing in his community, Mr Nawarathna wanted to be involved.

“One day when I was in my house, a vehicle from WMP came and asked if I would like to be a part of a program regarding dengue prevention. I was happy to help. The equipment was kept in my house … they came on a weekly basis and took a report. And that was a big deal when it comes to dengue prevention.”
Mr Nawarathna 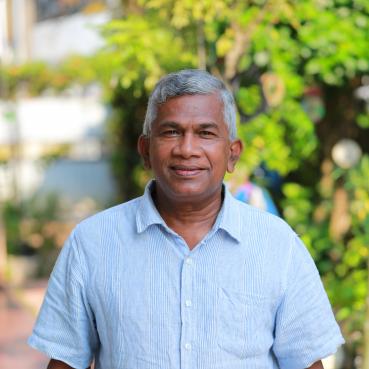 Communities like Mr Nawaratha’s have been told for years that the solution to dengue is fewer mosquitoes, not more. That’s why a huge part of WMP’s work involves community engagement. We work closely with communities to explain how Wolbachia works, what they need to do to maximise its impact and how complementary controls like keeping areas free of rubbish can support dengue reduction.

While there was some initial hesitation, the community soon came on board.

The World Mosquito Program introduced this measure of fighting dengue in Sri Lanka in March 2020. This initial phase of our work in Colombo wrapped up in June 2021, but its impacts will be monitored over the next five years.

Mr Nawaratha is excited to see the results in the months and years to come. He hopes the Wolbachia method will help create a Sri Lanka where future generations no longer fear dengue. But he stressed that the community must also play a role in protecting each other.

“If we use things in the correct manner and dispose of it correctly, mosquitoes won’t have any breeding place. When we destroy coconut shells or food cans after using them, the water won’t be there for mosquitoes to breed.”

Mr Nawarathna’s community is proof that partnering with communities is the most effective way to protect against dengue. Plans are in place for releases across the Western Province of Sri Lanka, and to gradually expand into other parts of the country and the world.

“I always think about the safety and health of my children, myself and all the citizens in Sri Lanka … As someone who had experience with people around me being infected from dengue, I happily welcome a method like this which could completely eliminate dengue from the country.”