Ask people in Sri Lanka about dengue, and the first word you’ll hear is 'fear'. Locals say the mosquito-borne disease can strike anyone, anywhere, anytime. The danger is always there.

There is no pill or vaccine to protect you from dengue. No full-proof remedy to cure you from it. If you are lucky, your symptoms may be mild. But for many, it’s the worst sickness they’ve ever experienced. Worst still, it can be fatal.

Everyone you speak to in Sri Lanka knows someone who has borne the brunt of dengue.

Thilaka Hettikodahe who lives in the capital, Colombo, says her 10-year-old son had dengue several times and was once hospitalized because of it. Her brother’s child barely survived dengue, and a neighbour’s child died from it.

“I faced a lot of difficulties…I was very scared. I even fainted once,” says Thilaka when speaking about her son’s illness.

It brings me so much pleasure to be involved. All children are like my own children. If dengue can be completely eliminated, I would be so relieved.
Thilaka Hettikodahe
Colombo resident & mother 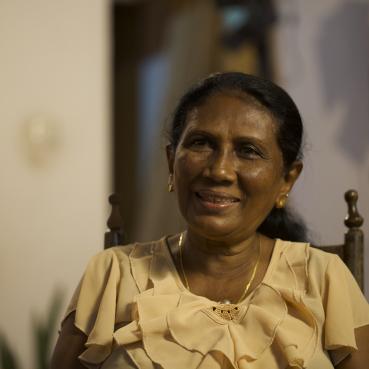 Others speak of adult relatives debilitated by dengue, unable to work and look after their families, and barely able to walk even 1-2 months after they have recovered.

“If your father or mother gets infected then who is going to take care of the children? How are they going to earn their living?...Being infected with dengue is a disaster,” concludes Kavindya Candappa, a woman who has seen the impacts of dengue up close as the World Mosquito Program’s Field Coordinator in Sri Lanka.

So just how severe is dengue in Sri Lanka?

Statistics show that in recent years dengue cases have surged with more than 40,000 cases most years in the last decade, and 186,000 cases in 2017. The disease has certainly emerged as a serious public health concern throughout the country.

Buddhist monk Kalaganwaththe Silalankara Thero puts it this way: his country has had a “mosquito problem” forever.  “Everyone fears dengue so much…This tiny dengue mosquito can take someone’s life easily…Only because of COVID-19 that people have forgotten dengue for the moment. I think dengue is deadlier than COVID-19,” he adds.

To fight dengue, people have tried to keep their surroundings clean and clear of stagnant water – a perfect mosquito breeding place; and used smoke or chemicals. No one quite knows what the full consequences of using pesticides might be. But most people agree on one thing: they can cause harm to more than just mosquitoes.

Dr. Nimalka Pannila Hetti, a doctor from the National Dengue Control Unit who has worked on public measures to control dengue in Sri Lanka for 13 years , puts things in perspective:

“Dengue is a disease that is not amenable to eradication because there may be plenty of breeding places hidden, which still have potential. But most of the breeding places can’t be removed. Therefore, for eradication, we must either have a vaccine or we should eliminate the breeding places 100 percent. So in the absence of both possibilities, we have to think of other measures for keeping dengue at bay.”

Fighting dengue from within

One such measure, a new way of fighting dengue in Sri Lanka was introduced in March 2020 by the World Mosquito Program with the support of the Sri Lankan Ministry of Health and the National Dengue Control Unit.

It involves breeding mosquitoes who carry the naturally occurring bacteria Wolbachia, which prevents them from transmitting dengue to humans. These mosquitoes are released in areas at high risk of dengue, breed with local mosquitoes and pass the Wolbachia from one generation to the next – until most of the mosquito population carry Wolbachia.

The Wolbachia mosquito eggs have been introduced in two areas of Colombo, the Municipal Council-District 1 (CMC-D1) and Nugegoda - with a population of over 200,000 - where dengue rates are high.

The egg-filled containers are placed weekly, so that the Wolbachia mosquitoes get released regularly by World Mosquito Program staff with support from community members and Public Health Inspectors.

“Usually, we speak about destroying the mosquito. But with this method, we release mosquitoes with Wolbachia into the environment,” says Thilaka Hettikodahe.

“If there is a way to not destroy the mosquito while also minimizing the risk of being infected by dengue, we would happily embrace it,” adds Kasun Chameera, a community member who has been supporting the World Mosquito Program’s work in Colombo.

“Everyone fears dengue so much… This tiny dengue mosquito can take someone’s life so easily.
Kalaganwaththe Silalankara
Buddhist Monk, Colombo

In a largely Buddhist country, their remarks attest to the principle of doing no-harm to and having respect for all life.

Colombo residents admit that they were concerned about the Wolbachia method in the beginning. ‘Wouldn’t more mosquitoes bring more dengue? Couldn’t the new mosquitoes bring other diseases?’ they wanted to know.

But as they learnt more about how the method works and the success it’s had elsewhere, they were quick to embrace it. In fact, without their support and involvement, the releases would not have been possible.

The initial phase of the project will wrap up in June 2021, but its impacts will be monitored over the next five years. Plans are in place to expand releases across the Western Province and to gradually introduce the Wolbachia method to other parts of the country.

It will be some time before we see significant results, but Colombo residents and health care staff alike describe the Wolbachia method as an opportunity, more effective and sustainable than previous measures to control the spread of dengue.

“All children are like my own children. If dengue can be completely eliminated, I would be so relieved. I like to get involved in these projects. It brings me a lot of happiness,” concludes Thilaka Hettikodahe, the mother whose son survived dengue, and one of the community members supporting World Mosquito Program’s work - bringing hope of a dengue-free future to Sri Lanka.