Women and Girls in Science Day 2022: meet one of WMP’s scientists and some of Brazil’s girls who help their communities be safe from mosquito-borne diseases

Sofia Pinto, a Portuguese scientist, moved to Brazil eight years ago. She has always known, she says playfully, that she wanted to live somewhere in the tropics.

But it wasn’t the climate that motivated Sofia to move to Brazil. It was her interest in neglected tropical diseases and the desire to put into practice her knowledge in biology and genetics after years of studying in Lisbon, Heidelberg, London and Oxford.

It’s not surprising then that for the past four years Sofia has been growing mosquitoes. Sort of.

The lab she manages in Rio de Janeiro churns out about 8 million mosquitoes every week.

“We have come a long way. From what was like a pilot project to a facility that can now rear enough mosquitoes for large-scale distributions” says Sofia.

She’s referring to lab-grown Wolbachia mosquitoes that the World Mosquito Program (WMP) has been releasing in Brazil since 2014 to protect people from mosquito-borne diseases.

“It was counterintuitive at first. For decades, people in Brazil have been told – kill the mosquitoes. This is your best bet against dengue and other such diseases,” explains Sofia, smiling.

Recent field trials concluded people were right to believe in the Wolbachia  method. The trials showed a 40 per cent reduction in dengue incidence in Rio de Janeiro and 65 per cent in Niteroi where Wolbachia mosquitoes have been released. In Niteroi, chikungunya incidence was also reduced by 56 per cent and Zika by 37 per cent.

The Wolbachia method consists of introducing into mosquitoes populations a bacterium – called Wolbachia - that stops them from transmitting dengue, chikungunya, Zika and yellow fever viruses. Pioneered by Australian scientists at Monash University, the method is now being rolled out by WMP in 11 countries.

As WMP Brazil’s Entomology Coordinator, Sofia played a big role in bringing the Wolbachia solution to communities in Brazil. To date, over 2 million people in Brazil have been protected from mosquito-borne diseases.

“What I like about science is that it makes you curious. It makes you look at a problem from every possible angle and come up with a range of solutions. It forces you to think outside the box,” says Sofia.

Girls put on their scientists’ hats for Wolbachia

Just like Sofia, thousands of girls and boys were fascinated by the science behind the Wolbachia method and were eager to know more.

The students have learnt about Wolbachia in their science classes. They looked after mosquito larvae and watched them grow. When the time came, some of them released the Wolbachia mosquitoes in their neighbourhoods and talked about the benefits of Wolbachia to their families and community members. Their support has been vital to growing community support and scaling up Wolbachia to communities shouldering the burden of mosquito-borne diseases.

"I found the classes very interesting because Wolbachia mosquitoes will not transmit diseases to people and this will also help doctors a lot.”
Aryane da Silva
Secondary school student from Adelino Magalhães school in Niterói

"Now that the mosquitoes have the bacterium [Wolbachia], they will do good for people."
Lyvia Symoni Peixoto da Costa
Secondary school student from Adelino Magalhães school in Niterói

"I enjoyed watching the mosquitoes grow. We kept writing down everything about the mosquitoes in the notebook."
Yasmin Pereira
Student at Nerval de Gouveia school in Rio de Janeiro (pictured left) 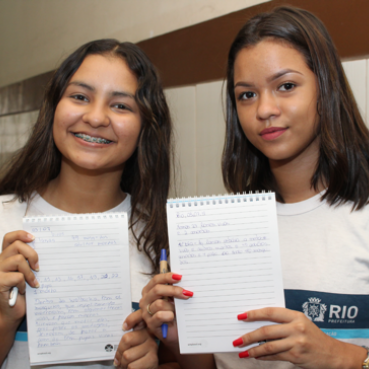 WMP’s Wolbachia  method has been rolled out in Brazil through The Oswaldo Cruz Foundation (Fiocruz), under the guidance of the Ministry of Health.

In Brazil, dengue re-emerged in 1981 after an absence of over 20 years. Over the next 30 years, seven million cases were reported. In 2021, with nearly one million reported dengue cases, Brazil had the vast majority -  83 per cent - of all reported dengue cases across the Americas, according to the Pan-American Health Organization (PAHO). Zika, which can cause life-long disabilities in children, and chikungunya have also been wreaking havoc in the lives of people in Brazil.