Painting murals is just one of the ways the World Mosquito Program has engaged with the community in Yogyakarta – Wolbachia mosquitoes are enriching neighbourhoods and villages in Indonesia.

Andri Kuswanto helped young people in Bangirejo learn how to design and paint the mural that now brightens their kampong (village) wall. The mural also has a serious purpose in informing the community about Wolbachia mosquitoes and their release across Yogyakarta, Indonesia.

The World Mosquito Program organised a mural workshop with young people in collaboration with local mural artist Aditya Arya Wibowo. After the workshop, Andri who chairs a local neighbourhood group, mobilised the young people in his area.

“When the murals were being painted, there were a lot of questions from passers-by: what kind of mosquito is this and why are the mosquitos wearing the ‘W’ logos? We were able to talk to them about the importance of preventing dengue with Wolbachia mosquitoes,” said Andri. “Lots stopped to take selfies.”

Initially the Bangirejo community was a bit sceptical about the releases of Wolbachia mosquitoes. As time went by and there was more community engagement such as the workshops around the murals, people realised the benefits offered by the World Mosquito Program’s Wolbachia method. Mosquito releases only begin after thorough engagement with communities and approval by the government.

Following encouraging results from the initial trials in Yogyakarta, a large-scale efficacy study to evaluate the impact of the Wolbachia method on dengue transmission is now underway.

The community – old and young, women and men – and local officials have been very supportive of the mural project, so much so that teams of people have been drawing and colouring. Food, drink and paint have also been donated to the artists and their supporters.

“People now feel safe from dengue. The community has been well-informed by the program and the program is sustainable,” said Sri Winantri Purnomo Edi, Chief of the Rukun Warga (local government) in Bangirejo.

“I helped sketch and draft the mural. I used to be more of a graffiti writer, but I’m always happy to express myself and create something with my friends, and in collaboration with the World Mosquito Program,” said Aditya Arya Wibowo. “This is an art-based neighbourhood.”

“In Yogyakarta, nearly every village has a mural, so to reach out to the community we offered to support a mural in Bangirejo – three young people from the village trained with mural artists so that they could paint the mural themselves,” said Dedik Helmy Yusdiana, a Community Engagement Specialist from the World Mosquito Program.

Yusdi organised workshops to engage with community leaders, such as people from the pendidikan kesejahteraan keluarga (PKK, family welfare organisation), and the young people.

“Having the murals ensured that many people in the community were reminded about the Wolbachia method. We used Wolbachia as a brand on the wall of a busy thoroughfare as a creative way [to] communicate about the project.”
Dedik Helmy Yusdiana
Community Engagement Specialist 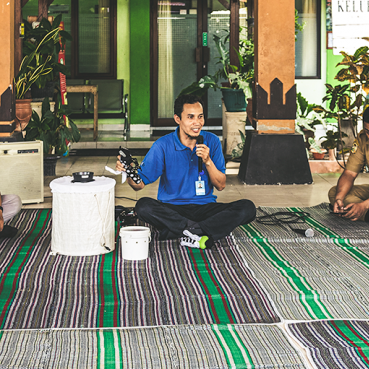 The World Mosquito Program is committed to strengthening the capacity of local communities around the world to reduce the threat of mosquito-borne diseases. In local communities, we raise awareness, provide information about the project, consult on the best way in which to do this locally, and collaborate with stakeholders to support implementation.

Learn more about our work in Indonesia.