In the coastal Cairns suburb of Yorkeys Knob, Allan and Jenny Cullington think the World Mosquito Program is a brilliant idea to help protect their grandson and their community from dengue.

During the outbreak of dengue fever in Cairns in 1999, when Allan Cullington was running the Yorkeys Knob State Emergency Service Volunteer Unit, Queensland Health asked the SES for help. Allan agreed straight away. He and his team went door to door providing information about using surface spray to kill mosquitoes. At the time, spraying to reduce the mosquito population was the only solution.

An innovation of the World Mosquito Program, the Wolbachia method is a safe, natural and effective way to combat the threat of mosquito-borne diseases, such as Zika, dengue, chikungunya and yellow fever. When the World Mosquito Program (then Eliminate Dengue) explained the program to the SES and other community-based organisations over a decade later, Allen thought it was brilliant.

“They talked to the SES and we got on board and interviewed nearly everyone in ‘The Knob’ to see if they would host a trap and allow mosquito releases on their property. It’s not much for us to provide space for a trap, but if the trap took up the whole room, I’d still have one because it is a brilliant idea,” says Allen Cullington.

Jenny and Allan remember that the dengue outbreaks were getting more serious and they wanted to be as self-reliant as possible and make the community safe.

“It’s great to be able to do such a small thing, but for the whole community – to protect the children of the community. At the time, our grandson Jack hadn’t been born, so we weren’t thinking about him, but now he is protected too.”
Jenny Cullington 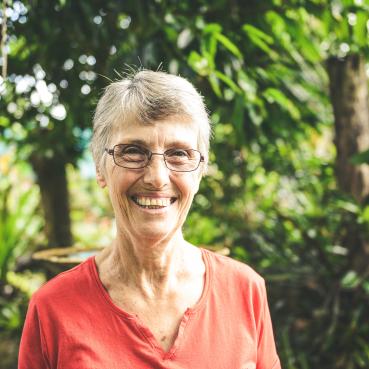 Both thought that it had been a real privilege to be involved, from learning about the Wolbachia method, to helping the community and hosting media events – even Bill and Melinda Gates visited to look at the trap in the garage and talk to the World Mosquito Program scientists.

“It’s a privilege personally. It’s a privilege for our community – Yorkeys Knob was the laboratory and now Aedes aegypti mosquitoes carrying Wolbachia are being sent all over the world to help underprivileged communities,” says Allen.

Learn more about our work in Australia.