“People responded to this program so positively. They were very active and very welcoming. They have so much hope and expectation.”

The success of our Wolbachia method depends largely on trust.

Government bodies and health authorities in the cities where we work understand the facts. They’ve seen our science, our history and the evidence of our impact. The community has too, to an extent.

But people’s willingness to have thousands of mosquitoes released in and around their homes – when they know the dangers mosquitoes can bring – shows that we and our partners have earned their trust.

We owe that trust to the community leaders and spokespeople who inform local residents about how our method works and what it hopes to achieve. And in a place like Yogyakarta, Indonesia this role is most often handed over to women.

“Because women often show more resilience – and because they talk more, communicate more – they are seen as more persuasive agents.”

Mrs Riyan Wulandari is Head of Pakuncen Village, a municipal jurisdiction in Yogyakarta City. She agrees that women are pivotal in relaying information within their community.

“I don’t say this because I am a woman, but I think women are more gracious. They show more compassion and speak from their heart. And they support each other. If any of them gets pinched, all will feel the pain. So, don’t let anybody get pinched so nobody will get hurt!” 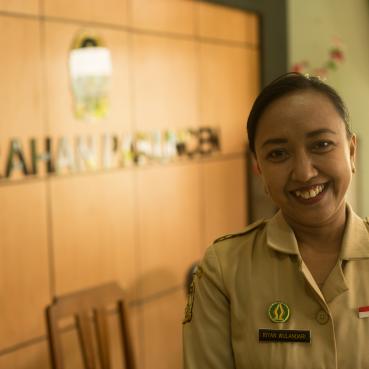 In Yogyakarta, women carry significant weight within the health sector. They outnumber men as Village and Sub-District Heads and make up the vast majority of health cadres across the cities – driving health campaigns and promoting a clean and healthy living environment.

The Community Reference Groups relied upon by the World Mosquito Program to build awareness around our campaigns also primarily consist of women. We will not implement without the endorsement of the community so we need leaders like Mrs Riyan on board with our science, willing to explain the method so her community is on board too.

Thankfully she feels deeply about the need for our solution.

“It’s heartbreaking seeing children suffer from dengue,” she says. “For a long time we have been haunted by the high number of dengue cases. When we first heard about this [innovation], we saw hope that this research would bring us relief.”

Lifelong resident of a small hamlet in the city, Mrs Sugiyanti also believes women are best placed to build trust in the program.

“Mothers know every detail about what happens at home, particularly what happens with the kids,” she says. “We can teach them about a healthy life, hand washing and hygiene. We are more direct and open when talking about something. Men are more complacent. Like, for example, before implementing this method they might just say, “Ok, let them go ahead”. While women really want to know the benefits and what will happen after implementation. Women just have greater curiosity.”

Of course people will respond differently in different parts of the world. In Yogyakarta, Mrs Riyan explains, there is a natural tendency to trust. A faith that leaders and trusted institutions will make decisions with the best interests of the people at heart.

“We need to also take the culture of Yogyakarta into account,” she says. “People here are typically responsive when they can see the facts. They are also encouraged knowing that the funder of this project is Tahija Foundation who we have worked with before. And when the Sultan (the cultural and political leader of the province) warmly welcomes a program, the people generally follow. I think culture plays a role in the success of the project.”

With the results from our biggest ever trial showing a 77% reduction in dengue in areas of the city treated with Wolbachia, the city is embracing a more widespread release. The people are ready. Mrs Riyan says those that missed out on having mosquitoes released in their neighbourhoods during the trial felt disappointed they’d missed out. She says people have been waiting eagerly to know the results of the trial.

“This is the best part.  It makes us believe in how much they care about this program. People have so much hope and expectation for the success of this research. They are optimistic. Some even ask to host buckets of eggs. It shows us how thrilled and supportive they are of this method.”

What it also shows is that women like Mrs Riyan and Mrs Sugiyanti are powerful allies to have onside in this fight against the spread of disease.